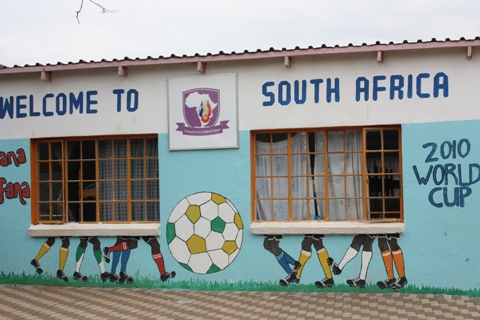 “There is a career path and there is a sacred path.”

I cannot get these words out of my mind. They were spoken to me by Anna Mojapelo, founder and director of New Jerusalem Children’s Home, when I visited the facilities of her orphanage and adjacent Montessori preschool a few weeks ago. A friend who volunteers there had introduced me to Anna, and I was busy poking my head into the nooks and crannies of the home – as many such places, it has grown by adding on a bit willy-nilly, so there are indeed a lot of nooks and crannies – and taking pictures while chatting with her about what she describes as her life’s calling.

You see, Anna used to work as a successful lawyer and businesswoman. As is often the case here in South Africa, her success brought with it a certain responsibility. Employees would come with their troubles and ask for help, and one day she found herself with a baby to care for. As word spread about her taking in this child, more of them appeared. She was soon juggling her day job with single-handedly taking care of close to a dozen babies – all of them troubled or sick. I cannot imagine how she managed this, and she herself admits that those were some dark and trying times.

But somehow she managed to struggle through many long nights, sustained by her unshakable belief, gave up her day job along the way, and decided to dedicate her life to these children and the many more to come. She bought some land and started building, recruited an impressive group of board members and donors, and continued to tend to the kids in her care. In the span of just ten years, she and her sister Phina have built New Jerusalem into what it is today: a sprawling home for almost 100 children with an adjacent Montessori preschool and a host of programs to strengthen the surrounding community. Thanks to partnering with medical providers and receiving anti-retroviral treatment – in a country whose government only fairly recently acknowledged the existence of an Aids epidemic – eighteen of their children who were born HIV positive are now HIV negative (note – this is just based on what Anna told me and not officially confirmed).

“It’s like a miracle,” says Anna. “It shows me that I’ve chosen the right course.”

What impressed me most on my visit to New Jerusalem was how neat and clean everything was. I got to peek into classrooms and watch as the Montessori children ate their snack. You could have eaten off the floor, and everything looked so inviting that, if I had preschool aged children, I would have asked for the enrollment papers. Anna tells me that in the early days nobody from the surrounding community wanted anything to do with her home, but this has all changed. New Jerusalem is now seen as a good place, something to be proud of. Children from all around flock to the preschool and space is running out, but Anna already has plans to build a new addition. She never quite stops, brimming with ideas to further integrate and strengthen the surrounding community through outreach programs and expand their international visibility to secure new funding.

While it all started with Anna’s dedication and hard work, the preschool is now a separate entity and run and funded by Orange Babies, a non-profit organization in the Netherlands. I was shown around by the principal, Marius van Dorp, who impressed me with his commitment to not only provide a loving environment for these kids, but to use the most effective teaching and learning methods to give them the best possible start in life. However, the need for new supplies is still great, and he would not let me leave without a long wish list, which I’ve added to the bottom of this post. Orange Babies has also been instrumental in reducing the HIV infection rate in the surrounding community by providing much-needed prenatal care and medication. Abandoned and abused children continue to find shelter at New Jerusalem, but the incidence of Aids has been greatly reduced.

Most striking, perhaps, is the image of 10-year old Aurora, the first born child of New Jerusalem. More than anybody, she embodies the hope Anna has been able to inspire in the downtrodden and abandoned.

“When I grow up I want to be a doctor,” says Aurora, “because they have saved my life and I also want to help and save other children.” Somehow, I’m sure that she will achieve her dream, because she was given that tiny seed of hope and opportunity ten years ago. And she will in turn work hard at building a better country and giving hope to others. 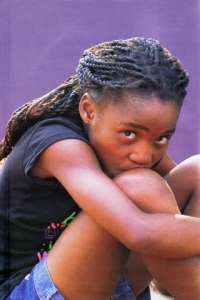 One person may not be able to change the world, but Anna Mojapelo has made the world a better place for the children of New Jerusalem. It makes you wonder: Which sacred path is each and every one of us meant to pursue?

Contact Orange Babies at Info@orangebabies.org.za directly if you wish to help or become involved.

Pure Joy
Have You Given Your Money Away Yet Today?
Finding New Feet for Outgrown Shoes