I’m writing this as the wind is howling outside (actually, it is also howling inside; South African houses aren’t built very well). A very unusual occurrence in Johannesburg this time of year. Usually winters are cool but with calm and clear skies, and it never rains in Joburg during the winter. Then again, ever since we’ve moved here, we’ve been told that something or other about the weather is unusual this year.

In any case, it’s been pretty cold for about two weeks, which is in keeping with the official South African winter months of June and July. It dropped below freezing during the nights, which has sent me on frenzied errands to Builder’s Warehouse to buy frost sheeting and mulch for my bougainvilleas.

Actually, it was a typical African shopping experience. I come into the store and make my way to the gardening section. I can’t find mulch and no one is there, so I make my way back to the entrance to ask for help. After three people tell me that no, they don’t have mulch (I have learned better than to listen to the first person), I find one who says yes, we just got some in. He shows me where it is, which is about a half a mile across the parking lot in some obscure corner I would never in a million years have found. Just pay for it, and then drive your car here, we’ll load it for you, he tells me. Do I need a part number, I ask him. No, they’ll know at the till what it is. So I trek back, through the entrance of the store, back to the other side and the checkout line. The cashier scans my two other items, but when I tell her I want mulch, 3 bags at 30 dm, she looks at me like I’m from another planet. M-U-L-C-H, I tell her helpfully. She still doesn’t know and informs we that I’ll have to show her. I grind my teeth, but there is nothing to be done. Together we march back across the parking lot to find the mulch, once again. Ah, mulch, she exclaims. The first gentleman who showed it to me is still there and berates her in rapid Zulu of which I understand nothing but the angry sound of it somehow mollifies me. Then he orders one of the parking attendants (the ones that always obscure your view by standing right behind your car and waving you out of your parking space) to wait right here and help me load my car when I come back. But of course  he has business to attend to and R2 pieces to earn while I undertake the fourth parking lot crossing to pay for the mulch, and when I finally get back, no one is to be seen. I’m sure back home I would have just left it at that and loaded the darn bags myself, but I’m not about to pay the parking attendant for his useless signaling maneuver, which he’ll be sure to magically appear for, if he doesn’t at least do the loading for me. So I put my fingers in my mouth and let loose an ear-piercing whistle, which does indeed produce the desired help. All in all another 5-minute errand that took 45.

So I covered all the finicky plants (bougainvillea, birds of paradise, and some kind of obscure tree the name of which I don’t know but which had already almost died last year) in white frost sheeting. Our yard looks as if Halloween is imminent, with white ghost-like figures swaying in what by now sounds like gale force winds. We’ll see if my job – I mainly used a stapler – holds up.

My other errand was to buy a heater. I think I might have told you in my Moving Checklist to look for a house with under floor heating. Let me rephrase that: If your company is paying for the electricity, look for a house with under-floor heating. Otherwise, you might as well not have it, because using it will cost you a fortune. Last year, our electric bill tripled in the winter, and I still felt cold. Instead, we are now using this brilliant gas heater that a friend who moved to Singapore – definitely won’t need a heater there – was selling: 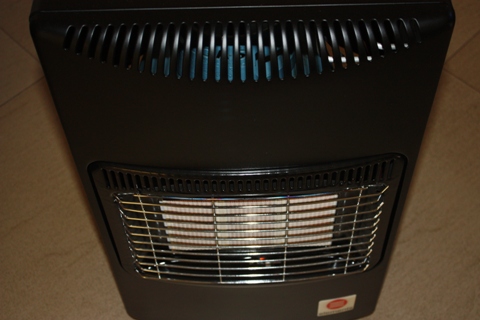 It moves around on wheels and has its own gas bottle. I turn it on every morning when the kids come down for breakfast. It is very warm and toasty. We really just need it for that half hour, because after that the house gets heated up by the sun (except on a day like today when there is no sun).

In the evenings we mostly go to be early, like everyone in South Africa seems to be doing. Sometimes we use the gas fireplace when we’re watching TV, which is also very warm and toasty. But the cat doesn’t seem to have gotten that message. As a result, she is now wearing curly whiskers and trailing a singed smell. But what can you expect from a cat named Mouse?

Did I say it never rains in Joburg in the winter? Well, this wind turned into a full-fledged thunderstorm that raged all night. In the middle of June! At least the temperature had actually gone up a bit, so we didn’t get any snow in Joburg. Not yet.

The Climate
Joburg Lightning and Rainbows
The Destructive Power of Nature