When you’ve done a canopy tour, a bungy jump, and a whale watching tour in the space of just three days, it is very hard to come up with something else which will excite six kids (our own four and two visitors). It is also hard to come up with more money to keep paying for these excursions, so for Day Four during our recent stay in Wilderness on the Garden Route I came up with the glorious idea of going on a hike. Noisette likes hikes and this was Father’s Day, so I thought it would be more fun than spending our last day simply hanging out on the beach as originally planned. Up the hill right behind Wilderness there is a spot where the paragliders take off from, and nearby there is a place called “Map of Africa,” about which I knew absolutely nothing but it sounded promising. Plus there had to be a view from up high.

Well – the entire way up the hill I got an earful of complaints from the usual suspects – Zax and Impatience (who keep wondering why I won’t change their blog names) – on how this was the absolute worst idea anyone could ever come up with, and why couldn’t we be normal like other families, yada yada yada. Please note how no one mentioned normal families when we did fun stuff. Even Sunshine chimed in this time, which I should have known because walking is not her strong suit. Especially uphill.

And uphill it was. A very steep road, unfortunately also frequented by many cars going at top speed. The only thing that saved me from open rebellion was a pasture with horses about halfway up, whom we spent some time feeding and patting. When our path took us straight through a township, even Noisette had a  mutinous look in his eyes and grumbled about my lack of wisdom (I refrained from pointing out that he was the one who insisted that everyone come along – my plan was for voluntary participation, which I admit would  have resulted in me walking all by myself). It was actually quite funny, as we attracted quite a few stares from the boys playing soccer on the dirt road and the women carrying water buckets on their heads. White people don’t normally walk through a township. Actually, white people don’t normally walk, period.

If I’ve learned one thing as a mom (and wife) it is to remain cheerful during occasions such as these instead of expecting some – any – kind of understanding. So just imagine, for a moment, a woman striding up the mountain (without socks – I had to cede those to Zax who had tried the lack of his as a ploy to disqualify from the hike) singing full-force, followed by a troop of grouchy kids with murderous looks on their faces, only keeping up because they need to unload all their bickering and sulking onto this lady’s ears…
That was pretty much our day. The Map of Africa was cute (a river carving its path in the shape of the Southern tip of Africa) but, as the kids correctly pointed out, just as easily reached by car. The paragliders were absent that day, so not even any excitement by proxy. But we saw a big grasshopper!

Thankfully, Noisette and Zax went to get the car while we fed some more horses, and we did get in another few hours at the beach – with pizza –  before having to catch our flight back to Joburg. There even was some skinny dipping, as witnessed here from very far away:

By the way, Jabulani – who had also not wanted to go – later told me that he enjoyed the hike, and that he wanted to go hiking again soon, which we did shortly thereafter in Germany: 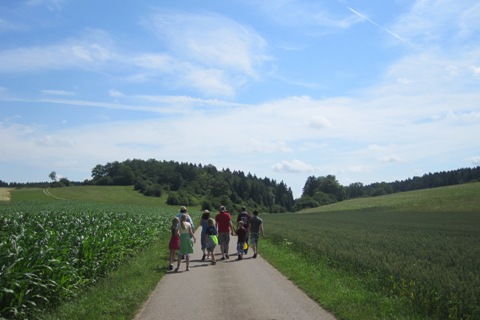 So I enter our Very Boring Hike as exhibit for my case that parenting is all about starting tiny seeds. There is no instant success, no 100% conversion rate. If you look to be praised for your work or want to see results immediately, you should never become a parent. Parenting is all about realistic expectations. Frankly, one out of four is a pretty good percentage for our family. In fact, getting everybody to come along was a huge success in itself!

Travel in South Africa in the Age of Apartheid
10 Ways Johannesburg and South Africa Have Changed...
The Bloukrans Bungy Jump