If you’re holding out for a good winter storm and icy roads here in Johannesburg, you’ll have to wait until summer. Yep, the weather is kind of weird. Although still mostly very beautiful.

This was the scene in our yard last week, the beginning of February: 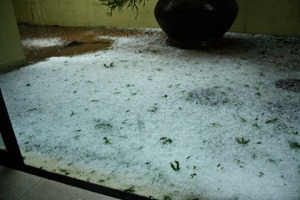 Looks like any good February day in the Northern Hemisphere, doesn’t it? I have really seen so much hail before in my life. There were balls of ice bouncing off every available surface, making a huge racket, planting in you the unreasonable urge to rush out and rescue whatever it might be needing rescuing from such assault. When it was all over, there was a smell in the air. I couldn’t quite place it, until Zax aptly compared it to the inside of a pumpkin being carved for Halloween. That’s EXACTLY how it smelled. A winter wonderland smelling of pumpkin innards.

Bougainvillea and Hibiscus definitely don’t take well to hail, I can tell you that. Poor little guys. After I  had just coaxed them back from the beating they got from frost last winter. You might want to consider this when planting your garden. You do get pretty regular hail storms here in Johannesburg.

Oh, and when Noisette stepped into our outside shower the next morning (he adores that outside shower, I’m certain this will be the one thing he’ll miss most about South Africa whenever we go back), he found two huge bricks of ice lodged there. Although it’s the middle of summer and our days are in the mid-twenties (Celsius that is, which is around 80 in Fahrenheit).

Almost as weird as the roads we encountered while driving back from Klaserie Nature Reserve shortly after New Year’s (which was even more in the middle of summer than now): 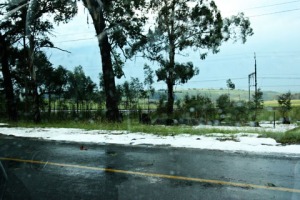 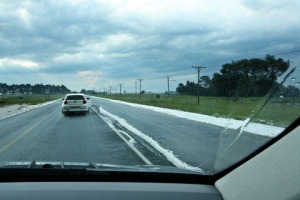 You could have been right in Kansas for all I know. I half expected a snow plow to come chugging along. It was definitely treacherous, especially since this is South Africa and no one has a clue about how to drive on snow and ice.

In case you’re wondering, it is raining now and I’m considering putting on a sweater. I’m looking forward to winter when I can bask in the sun by the pool.

Joburg Lightning and Rainbows
Rain, Rain, Go Away!
When it Turns Cold in Joburg