Spoiler alert: If you’re in the process of moving to South Africa, you may not want to continue reading. It  may make you want to cancel the relocation agent and the tickets. Read at your own peril.

I’ve told you about the beautiful weather. I’ve gushed on about Expat Joys to expect. I can’t say enough good things about our school.

But I have neglected to warn you of this natural disaster found in South Africa, and particularly, for some odd reason, in Johannesburg: The Parktown Prawn.

I was looking out over our beautiful pool this morning, and what should I spot lurking on the bottom?

As you know, I take pride in our pool. I can spot something wrong with it from a hundred miles away. Sure enough, the close-up revealed that there was a foreign intruder in it.

What now? The pole with the net would be the way to go, except my coffee guests arrived at the door that very moment. It would have to wait until later.

But of course later, it was gone. Good? No, terrible! Because that could only mean one thing – that monster was now hidden somewhere in the netherworld of pool piping, either clogging up some filter in its entirety, or, worse yet, disintegrated into bits and pieces…

There was nothing to do but to go search for it. Luckily, my first hunch proved true, and it was trapped near the weir basket. Although why it wasn’t IN the weir basked is beyond me. Unless there is ANOTHER one somewhere? 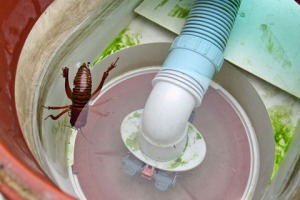 I didn’t tell you about this part when explaining pool care, did I?

The problem with this situation: the pole with the net was way too big for such a small opening. What would you have done, I ask you? I guess I could have gone for some shovel. Or tongs. Or the pool toy bucket in hopes of finding something useful there. But, you see, I’m lazy, more so than being grossed out by gross stuff floating in my pool, so I did what was the most expedient: Reached in, grabbed the thing by its leg, and flung it as far and wide into the flowerbed as I could.

I hope the cat won’t come dragging it back.

And yes, that algae needs some serious attention.