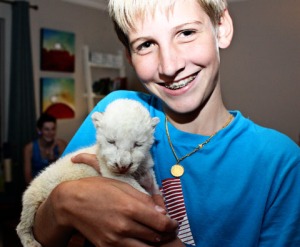 When the call came last Sunday evening, we dropped everything, dinner dishes scattered and house in disarray, and made for a friend’s house. She’s a vet, and a colleague of hers was staying over with a four-day old lion cub in his care. Which we could come and pet.

That’s what I love about living in Africa. I mean, where else are you going to get a call like that?

The excitement in the car was palpable. We don’t often get all four kids to want to come on an outing anymore, even when it is for food. So just to have the whole family squeezed into the car, chattering away, was quite the event.

Everyone had visions of playing with this baby lion, one grander than the other I’m sure, so the reality was a bit of a letdown when we got there.

“This is supposed to be a lion?” scoffed Noisette, dangling it in his hands. 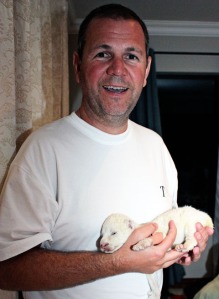 You can’t usually go by what Noisette says. In fact, I’m surprised he even wanted to hold any member of the cat species, as he’s been known to put our cat on a raft in the middle of the pool to see what she might do (jump and swim for her life, if you must know. And yes, I can say these things because he can’t ever run for U.S. President, so we don’t have to be mindful of stories like traveling to Canada with the family dog strapped to the roof of the car. Which is something Noisette definitely would contemplate doing if we had a dog).

But in this case, he had a point. That lion cub looked like a lamb and actually had woolly fur like a lamb as well. It had a tail like a rat. And it made little pitiful quacking noises like a duck. The only lion-like feature was its smell (not in a good way).

Next up was Jabulani:

As you can see, our lion (a girl, we were told) was a white lion. It had been born at the Lion Park, about which I’ve written about here, but wasn’t doing well and needed to be bottle-fed.

Next in line was Sunshine, our animal lover: 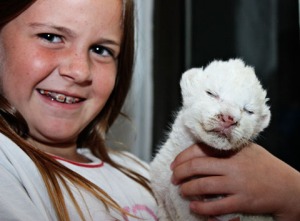 I couldn’t believe how human babylike that lion was. It was rooting and sniffing and when no milk was forthcoming, got very wiggly, craning its neck.

Impatience wanted nothing to do with “that smelly thing,” but Zax, even though he was probably already thinking about a place to wash his hands, was game: 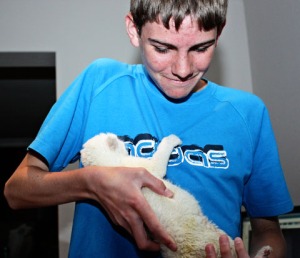 Finally, it was my turn. I was really dying to hold this lion. It was getting wigglier by the minute and clearly needed some calming down. Just watch and see what happened:

I’m hoping I’ll be called on next time there is a chance to babysit a lion cub. I could have sat there for hours just like that with a lamb-rat-duck aka lion plopped on my lap, feeling her little paw on my leg, chest heaving with a big sigh every once in a while.

Is it too late to have a career change? 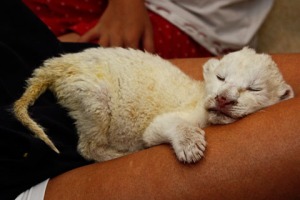 Epilogue: I later learned that, sadly, the lion cub didn’t make it. The vet had to give it back to the lion park when perhaps it wasn’t quite ready, and there he died over a long weekend. I’m  not sure why this makes me so sad, but I really fell in love with that little gal.

Are They Reading my Blog at the NYT?
Safari as Food
Mini-Safari at the Lion Park