So I received an email, out of the blue, from an organisation called Money Transfer Comparison. You may be forgiven if you’ve never heard of them. Neither had I.

They wanted to let me know that their editors had selected my blog as the winner of Top Expat Blog in South Africa for 2015. 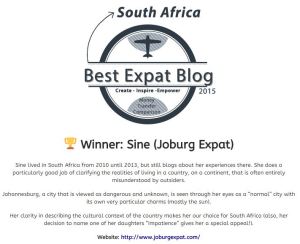 Naturally, I went and checked out their website. The name, frankly, sounded kind of sales-pitchy and didn’t inspire much confidence – what would they know about good writing?

I must say I stand corrected. They really seem to have done their due diligence and delved deep into each blog they reviewed. What they wrote about mine shows they’ve spent some time on Joburg Expat and understood my point of view:

“Sine lived in South Africa from 2010 until 2013, but still blogs about her experiences there. She does a particularly good job of clarifying the realities of living in a country, on a continent, that is often entirely misunderstood by outsiders.

Johannesburg, a city that is viewed as dangerous and unknown, is seen through her eyes as a “normal” city with its own very particular charms (mostly the sun).

Her clarity in describing the cultural context of the country makes her our choice for South Africa (also, her decision to name one of her daughters “Impatience” gives her a special appeal!).”

Nice, isn’t it? Thank you, Money Transfer Comparison. Now I know who you are. And I’ll give back some love by mentioning you to my readers.

Dear Joburg Expat readers: If you want to learn more about exchange rates, how to save money with international money transfers, hedging your transfers, and why it’s best not to use banks, visit Money Transfer Comparison.

And now, if you enjoy reading expat blogs from around the world, check out the entire list. There are some really good writers featured there!

2013 By the Numbers
My son in England – birthday – Please ...
A Small Improvement for Joburg Expat